Hi, I can't believe how long this post on Jaywick has taken! I completed it last week and when I went back in to edit something the whole post was missing......vanished into cyberspace. I could have cried. I still don't know what happened. Anyway here goes. 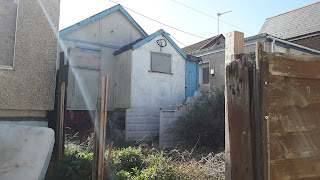 It was a beautifully sunny day when I ventured out on my walk in Jaywick,  which now seems like n age ago after all the rain we have had. Looking back at the photos I took on the day, they do lighten my heart during this particularly dreary, grey, extremely wet weather. 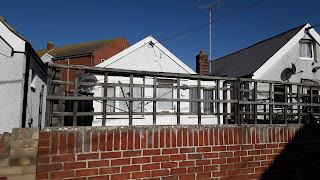 Jaywick is approximately 4.5 miles from the village I live in and you couldn't get more of a contrast if you tried. The landscape is unlike anywhere else in the country. 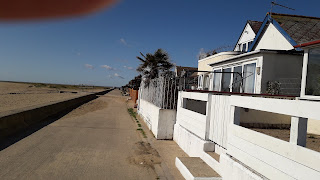 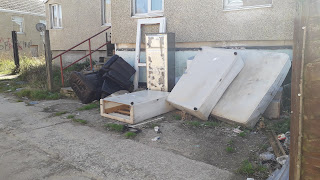 According to  research it was initially part of the plotlands craze of the early 20th Century. With its magnificent miles of golden sands it soon became a popular destination for factory workers from Dagenham and EastEnders who bought up strips of cheap agricultural land for a country retreat. Ford plant workers even built their chalets from the company's packing cases and named the streets, Hillman, Wolsey and Bentley. 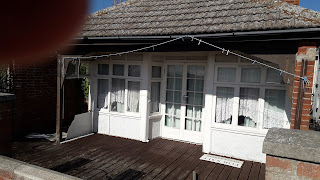 During the war bombed out EastEnders moved to their holiday homes permanently despite the chalets structures being classed as temporary.  They had no planning, no roads, drainage or electricity but I suppose it was better than the city conditions during the war. It is written that most plotland settlements were swept away by the 50's but when you look around Jaywick and its tiny little dwellings, many no bigger than a garage,  it hard to believe. Yes there is mains electricity now, drainage and tarmacked roads but you still get the sense that you are looking at a very temporary landscape. Of course there are some beautiful properties which have been lovingly extended and take advantage of the sea views. 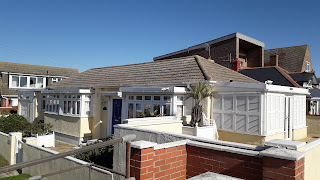 A small one bedroomed renovated bungalow in Jaywick will set you back £52K whereas as beach hut in Holland on Sea 5 miles along the prom will cost in excess of £30k. CRAZY! 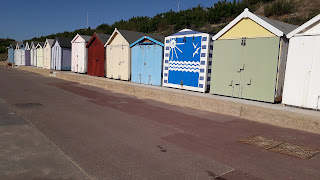 Jaywick is classed as one of the most deprived areas in the UK. Unfortunately, the small unrenovated homes have lent themselves to some unscrupulous landlords buying up these cheap properties to rent them out to Londoners,  who want to make their benefit money go further. And of course it has become the subject of a popular series of documentaries on Channel 5 : Benefits by the Sea. The Council have ploughed some money into the area but its well known that they would prefer to demolish it and allow developers in. Many locals feel they have been forgotten. A Jaywick cyclist who regularly uses the Council cycle path to get to the shops in Clacton stopped me as I walked. The route from Jaywick to Clacton floods regularly. He said he had complained  numerous times but Tendring Council had  told him it wasn't their responsibility and to ring the Environmental  Agency. The Agency were responsible as they had undertaken thousands of pounds worth of work along the east coast over the last 5-7 years both at Jaywick, Clacton  and Holland, in order to stop beach erosion. He wasn't a happy chappy.

The Environmental Agency work  has meant some of the beaches at Jaywick have turned grassy and are very popular with dog walkers. I found the walk from Jaywick to Clacton  very pleasant and I'll definitely be doing it again.

Bultins came to Clacton in 1938 after Billy Butlin gained the support of the local council in 1936. It was an extremely popular camp frequented by Londoners and I can remember my dad taking me there  on a 'day pass' when we moved to Essex from Liverpool in the late 60's. It had a great funfair, swimming pool  and large restaurant whereby you could see underwater views of occupants of the pool through glass windows, something that probably wouldn't be allowed now for one reason or another today! But like so many camps it closed in 1983 when alternative types of holidays became more popular.

The land was sold quickly to developers and housing of one sort or another now exists on the site. Did you visit a Butlins as a child? I went to Butlins Skegness a few years back with my daughters family and its still as good as I remember as a child. The entertainment was first class and so were the facilities but of course you are at the mercy of the English weather. Back a bit sooner. Tx