Since my retirement 3 years ago (doesn't time fly) I've been hankering after a dog.  We had a family pet  up until 17 years ago, a Jack Russell called Harry.  He passed away aged 16.5 years leaving a huge hole in our hearts.  We've always made excuses for not getting another and we certainly couldn't have handled one during the renovations. But over the last 6 months we have spoken at length about the commitment of having an animal.  We even spent 3 months looking at rescue homes but very few non shedding dogs came up.  I have  asthma which I didn't have until we got a dog. I have a few triggers, cat hair being the worst as it also makes my eyes swell, so we had to choose carefully. We finally agreed that if hubby chose the breed using the criteria laid down, I could choose the name. 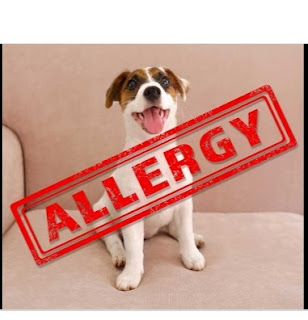 On Sunday 13th we headed 193 miles north to have a look at a litter of Welsh Terrier puppies.  They are considered a rare breed as the numbers have dwindled to an all time low and hubby has always wanted one.  We had to wait for the 'birth information' via the KC club who are keeping tabs on the number of breeders and subsequent litters. He becomes our fur baby on my birthday 23rd. 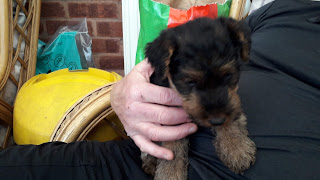 I  know a puppy is hard work and extra expense but when the rental property sells we will be able to make some serious decisions about our retirement. Hopefully hubby will agree to give up work. We will travel a lot more as so many hotels, cottages and B&B's take pets now, Bertie will travel everywhere with us, even abroad. When he can't come, my eldest daughter has agreed to look after him. 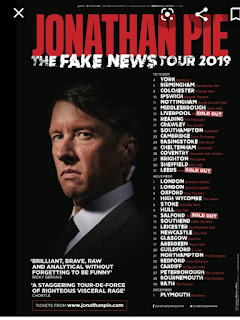 Another early gift, was from my  friend who kindly gave me some tickets to a comedian at a theatre in Ipswich.  His name is Jonathan Pie and he is currently touring the UK. He pretends to be a political correspondent and his current tour is called 'Fake News'.  We went for a meal and then on to the show which we thoroughly enjoyed despite the swearing which was necessary and in the right context. He is a very clever man, well educated and extremely knowledgeable about politics, tv coverage, social media  and the press. We were still giggling in the car on the way home, which is always a good sign. Bye for now. Tx