I wrote this post on Monday but with one thing and another it never got uploaded. The weeks are passing so quickly.

The chest freezer in the garage is my main source of frozen stock. I almost always forget about the small built in one in my kitchen. So I had a dig through and found, peppers, kale, broccoli and sweetcorn all in leftover size portions. I sauteed these with onion and garlic and it became the base for 2 quiches. I also got out some ham that was in there and 2 pork chops ready to defrost.  Tonight we'll have ham egg and chips, tomorrow quiche, potatoes and salad. Tomorrow, the pork chops with potatoes, veg and gravy. 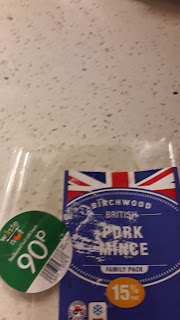 I also found was  a bargain pack of pork mince bought for 90p a while ago. Because it had a higher fat content than I normally buy I drained the lightly browned  meat before adding the onions and garlic. It was then split in two, one half became a cottage pie base and the other chilli. All 4 portions were frozen ready for later in the month. 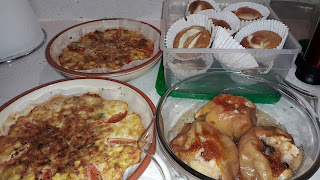 While the oven was on I made a batch of apple cakes from Joy's recipe @ frugal food slimming world. They didnt turn out as large as hers but they are very nice. I also baked 3 apples that had gone a little tough and wrinkly, filling the cored centre with mixed fruit and the apricot puree  I made last week. I always make good use of the oven while it's on.

If you're looking for a great saving tomorrow get hold of a metro paper (free transport paper found on London and surrounding areas trains etc) or Daily Mail Saturday, I'll definitely be at the paper shop first thing. According to Money Saving Expert there is a Lidl voucher worth £10 off £40. Got to be worth it for getting Christmas bits in.