WORSE.  On Tuesday I had an email from my solicitor confirming costs for the sale of the rental. There were lots of things to be printed out and complete ready to get the ball rolling. I downloaded each file and pressed print........NOTHING. Just as I got to the printer to see what was going on it started making a lot of noise and promptly died! I delivered CPR in the form of a new fuse but still no joy. 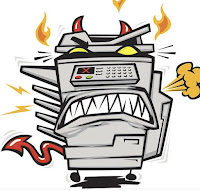 Noooooo, just when I needed it. I was so  angry as I'd only just bought new ink for it last month. The colour cartridge has never been loaded. Printer companies make their money through the 'INK' rather than the printer itself, that's why printers are reasonably cheap.   The ink was almost more expensive than the printer.

I bit the bullet and bought a new one, but not before getting the broken printer  packaging down from the loft to check how old it was. I tape the receipt on the inside of the packaging. It was less than 10 months old, so I got a refund on the broken one.

Strangely enough sitting behind the counter of the well known high street shop was an identical model to the one I was also returning which made me smile. I am convinced that electrical stuff has  a little glitch built in ready  to quit once out of warranty.  Yes, mine was within the time frame  but I was still left with the ink.

After seeing the other defunct printer behind the counter I refused to have the same model, so I'm left with the ink which I'll sell because it doesn't fit this one. Why can't one cartridge fit all.........because it would seriously hurt their profits! It's a con, just like every mobile phone has a different power lead, why!! These companies are clever enough to have a universal power lead. Rant over.

Things are moving fast, the buyers have had their survey and I managed to get the first lot of paperwork to the solicitors. Fingers crossed for a tech failure free week.  Bye for now. Tx