My month runs from the 22nd to the 21st of any month as that's when I receive my pension.  Last months food spend was £123.71 which I'm pleased about. The yellow sticker shopping saved me £26.45.
I've already completed another yellow sticker shop saving another £6.19. 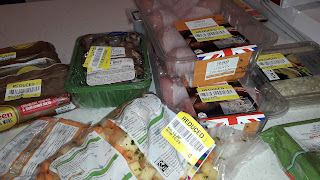 Although not huge savings on some of the items, the haul provided   some great meals. One tray of chicken legs went into the freezer with a pack of  20p soup base mix. The other tray of chicken legs went in the slow cooker along with a 33p stew pack and some of the 25p chestnut mushrooms. The legs were really meaty and provided over 3 meals, 2 of which went in the freezer. I had 2 Soreen fruit  loaves for 20p each. We had some sliced  with a cup of tea and  some has been made into bread and butter pudding with grated apple and black berries, absolutely delish.

Four of the 20p potato cakes were rolled out thinner and placed on a greased baking tray with some tomato salsa on top. I then added onion, ham and a more of the chestnut mushrooms, finally topping with cheese. This take on pizza was served with salad and a good dollop of luxury 29p coleslaw.  The following day the  remaining coleslaw was mixed with shredded lettuce and a tin of tuna, thus  topped some lovely fluffy baked potatoes that was served with fresh tomatoes, peas and corn.

I will head off later in the week to see what I can pick up yellow sticker wise. I quite like the challenge of turning my haul into meals. Plus  I'm able to buy Christmas food to put away. I already have the turkey crown, cheeses and chocolates. Im going to make my own sausage rolls and mince pies. There will probably be a veg price war as there has been the last couple of years, so I'll wait and buy fresh. Bye for now. Tx