After watching The Great British Bake Off Stand Up To Cancer last week I craved Iced Fingers.  I checked the ingredients on line and although I didn't have strong white flour I did have plain flour.  I even had yeast albeit almost 4 years out of date! As I have an aversion to shopping due to the current situation and the lack of yeast in shops,   I thought I'd test a small amount first so as not to waste any ingredients.  I placed half a teaspoon of dried yeast in a cup with sugar and warm water, 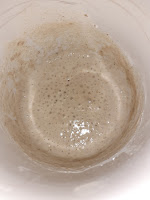 after a couple of hours in a warm place it was bubbling away so I knew it was alive! The following day I made iced fingers, thank heavens I halved the recipe because while they were OK with jam and cream initiaafter  a couple of days they went very hard. I didn't want to waste the five I had left so I sliced them up and made them into bread and butter pudding. It was nice despite being over cooked and we had it as a dessert with custard for a couple of evenings. 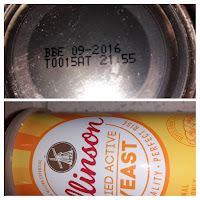 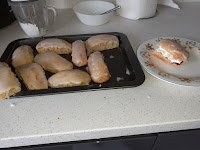 Thank heavens for my nutribullet, I can put granulated sugar into the cup, Whizz it up and  make it into caster sugar, or icing sugar. I also make oat flour from porridge oats for my banana pancakes.

Lots of seeds are sprouting and I'm really looking forward to growing again after not doing anything last year due to renovations etc. I'm not growing the variety of things I have before as I have a smaller garden since moving to the bungalow. But I will make every inch count. So far I've sown, runner beans, dwarf beans, peas, cucumber, courgettes, tomatoes, peppers and a couple of butternut squash. I don't have a greenhouse here so I'm going to buy a plastic walk in one for this year.

Since retiring 3.5 years ago I don't rush to get out of bed in the mornings. I normally get up and make a cuppa then return to bed where I read the news, blogs and other media bits and pieces. Sometimes I don't get out of bed until 9:30 but once I'm up I'm normally on the go continuously. There's always something to do besides the normal housework, cooking and walking Bertie.

I've been looking at Pinterest for ideas for Christmas presents that I could possibly make for my girlfriends and family. I haven't found anything yet but there are some incredibly clever people and  some amazing stuff on there. 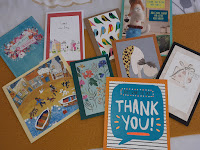 I did get a few ideas for card making especially male cards which are always harder. I'm quite short of cardmaking paraphernalia and the straight blade of my cutting machine recently broke making things harder. But in the spirit of 'use it up'  I've managed to cobble some cards together from the limited supplies I have. My great niece is 18 next month and my grandson 12 so I will make her cards at some point this week. Bye for now. Tx