In the spirit of 'use it up' I made some mixed bean chilli. Half a large onion and pepper sauted until soft in a small amount of oil. Then I added  some left over sweetcorn and a tin of mixed beans that had been rinsed, drained before adding to the pan together with 25g of red lentils. I had  half a sachet of chilli mix left, this was mixed with water and a dessert spoon of tom puree and seasoned before adding to the other ingredients. This was left on a low simmer for 30 minutes. I decided to freeze as the flavours will deepen and we can either have with rice or baked potatoes. 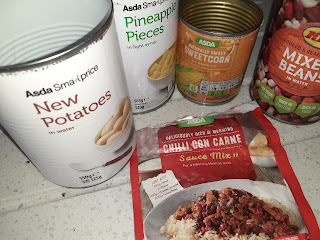 Yesterday I used half a tin of new potatoes and half a tin of sweetcorn.  in a chicken & mustard dish I grabbed from the freezer. The other half will be roasted ready to go with the very simple french bread pizza. Place the sliced part baked french stick in oven for 5 minutes, the top with half a jar of salsa, tomato slices,  pepper, mushrooms and cheese. 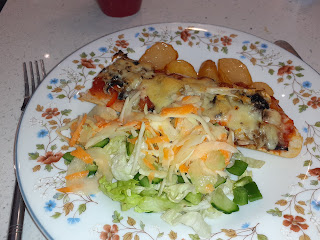 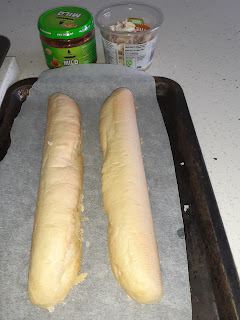 Next place  one third of a tin of pineapple chunks in a dish, add sliced apple and orange. Voila ...Simple fruit salad. The remaining pineapple went in the freezer, some more will go into fruit salad and the rest will become  pineapple sponge cake later in the week. 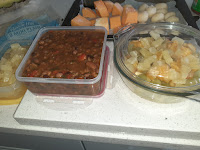 Tins, jars and packets all come in very handy. I've noticed a few out of date bits and pieces while I've been going through the cupboards that I will be looking to use up asap. 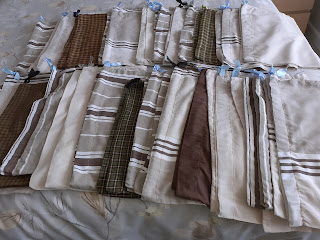 25 scubs bags have gone to Colchester hospital today. I will be making some more later this week. Bye for now. Tx