The feeling of tiredness and feeling cold has been overwhelming the last few weeks. At first I thought it was due to lockdown. But then I remembered  I would normally have my thyroid levels checked every 12-18 months. Well I'm  obviously not wanting to go to the doctors at this time, so when I ordered my prescription I included the additional dosage of thyroxin I have every now and again to stabilise my hormone levels. . The extra 25mg tablet takes my dose to 125mg and  normally does the trick after a few weeks.

The chemist I go to stays open until 8pm so I got there at 7 when its normally empty and it didn't disappoint. Straight in and out, just as I like it. I popped into Asda near by which was also deserted and picked up some flour, I always go down the baking aisle and look and at first I thought it was empty. But then I noticed loose flour on the floor so I crouched down and there was about 8 packs right at the back. They only had plain but better than nothing. I also grabbed 2 × bread, 2 x  sultana pancakes, asparagus, carrots, a stew pack and some new potatoes all for 10p each.

I've been looking for things to do indoors during the wet weather. So I got out my big shot die cutting/embossing machine to have a play. When I bought it secondhand many years ago it came with a few dies and embossing plates. But I've never really done any embossing. 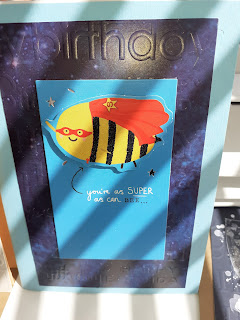 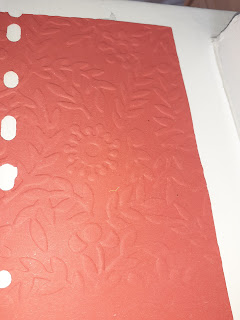 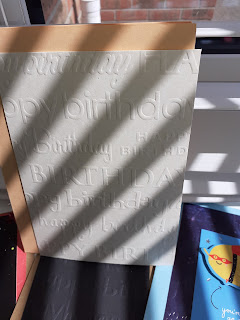 So I had a good old play around, I had to get them at an angle for the photos so you can see the raised print. I could really do with some crafting supplies as I'm getting low on card and a few other bits but I do  like to see what I'm buying.  I did get to use a die I've had a while for the flower inspired by the Cape daisy in my garden, it   just finished my great nieces birthday card off nicely. 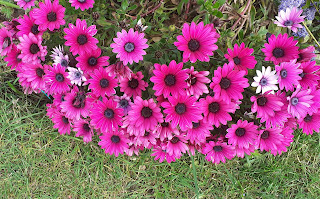 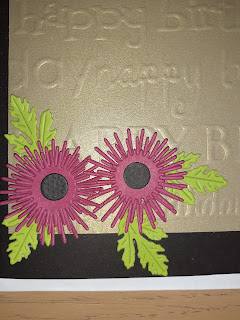 We were hoping to be out of lockdown for my grandsons birthday on the 15th but that looks unlikely. So I've made him a card ready to pop in the post. 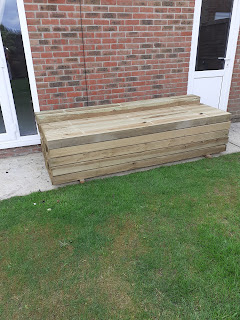 The weather looks good or at least dry over the weekend so we will be working in the garden once again. The sleepers for the landscaping arrived yesterday. They've been on order for almost 2 weeks, no email just a call 30 minutes before hand, saying we are in your area and have your delivery. They obviously believe everyone is at home! I do wonder what they would have done had we been key workers out at work! Bye for now. Tx