Hi all, yes it's been a long time since I've written a post.  A big thank you to  all of those people who dropped me a line or commented on other blogs asking after me.

Well, where do I start!

As mentioned at some point, hubby has been diagnosed with angina for a while now. He was put under the care of a  cardiologist who prescribed lots of additional tablets which hubby refused to take after a week. A) he sincerely believed nothing was wrong with him  B) he hated the side effects of the said  meds. C) he begged the question how do they know he has Angina when all the tests have been ok.

The cardiologist said the definitive test was an angiogram but its considered an invasive procedure, so they tend to hold off doing it. Hubby argued he'd rather know beyond a shadow of a doubt.

So 3 weeks ago,  after a blood/MRSA test,  covid test and shielding for 3 days I dropped him at the hospital for the angiogram. He phoned 6 hours later for me to collect him.

To say hubby was in shock would be an under statement, despite his own father dying of a massive heart attack at 52 and  his mother having a couple of stents. Anyway,  it turns out he has a problem both sides of his heart. One blockage could be resolved with a stent but the other (80% blockage) will require a bypass due to its position. He was told not to arrange anything for the next 4 month's.

Since the news last month, he has spoken with the cardiologists secretary and the boss where he works. Apparently his case has been discussed with a group of surgeons due to his diabetes.  The procedure is slightly different and more complex, which means he could actually end up with a double bypass,  but they do say it does give the best outcome. We've been copied in to all the letters and the secretary said once the surgeons have decided on the procedure, he will be called in for the op almost immediately. Hubby only works 2 days a week and has only just returned to work after being furloughed due to age and medical history.  His boss surprisingly, has been very thoughtful. He has arranged a medical retirement package to take him through to his 66th birthday next year. 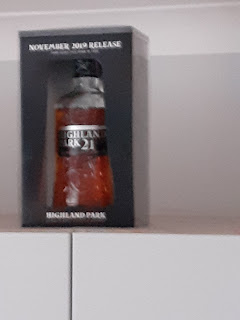 As you can imagine my plans have taken a back seat while we deal  with this.  He will need looking after for a short while, plus he wont be able to drive for a month after the surgery  I can tell he is worried as he keeps cracking jokes about dying. Only last night he poured a small glass of whiskey from a bottle my eldest daughter gave him recently, saying it would kill him to think he died without having tasting it! Highland Park 21 (November 2019 release) is worth over £200 and he said it's worth every penny. Apologies for the photo quality but it is on top of the wardrobe.